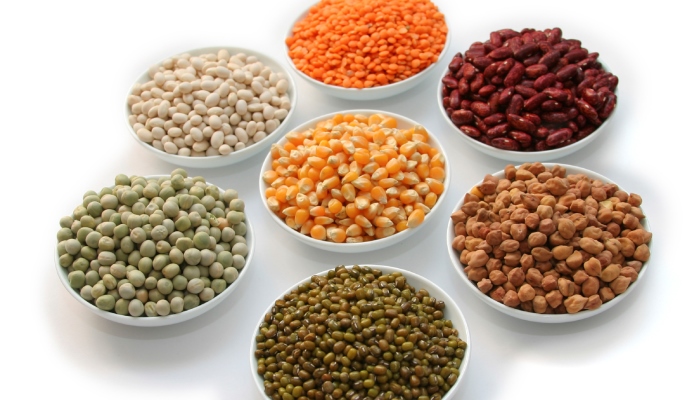 Beans and peas are the seeds of leguminous crops that are able to utilize atmospheric nitrogen via parasitic microorganismsattached to their roots. Legumes contain at least 20 percent protein, and they are a good source of most of the B vitamins and of iron. Like cereals, most legumes are low in fat; an important exception is the soybean (17 percent), a major commercial source of edible oil. Tofu, or bean curd, is made from soybeans and is an important source of protein in China, Japan, Korea, and Southeast Asia. Peanuts (groundnuts) are also the seeds of a leguminous plant, although they ripen underground; much of the crop is processed for its oil.

Uses
Farmed legumes can belong to many agricultural classes, including forage, grain, blooms, pharmaceutical/industrial, fallow/green manure, and timber species. Most commercially farmed species fill two or more roles simultaneously, depending upon their degree of maturity when harvested.

Forage legumes are of two broad types. Some, like alfalfa, clover, vetch (Vicia), stylo (Stylosanthes), or Arachis, are sown in pasture and grazed by livestock. Other forage legumes such as Leucaena or Albizia are woody shrub or tree species that are either broken down by livestock or regularly cut by humans to provide livestock feed.

Grain legumes are cultivated for their seeds, and are also called pulses. The seeds are used for human and animal consumption or for the production of oils for industrial uses. Grain legumes include beans, lentils, lupins, peas, and peanuts.

Legume species grown for their flowers include lupins, which are farmed commercially for their blooms as well as being popular in gardens worldwide. Industrially farmed legumes include Indigofera and Acacia species, which are cultivated for dye and natural gum production, respectively.

Fallow/green manure legume species are cultivated to be tilled back into the soil in order to exploit the high levels of captured atmospheric nitrogen found in the roots of most legumes. Numerous legumes farmed for this purpose include Leucaena, Cyamopsis, and Sesbania species. Various legume species are farmed for timber production worldwide, including numerous Acacia species and Castanospermum australe.

Nutritional facts
Legumes contain relatively low quantities of the essential amino acid methionine. To compensate, some vegetarian cultures serve legumes along with grains, which are low in the essential amino acid lysine, which legumes contain. Thus a combination of legumes with grains forms a well-balanced diet for vegetarians. Common examples of such combinations are dal with rice by Indians, and beans with corn tortillas, tofu with rice, and peanut butter with wheat bread (as sandwiches) in several other cultures, including Americans.