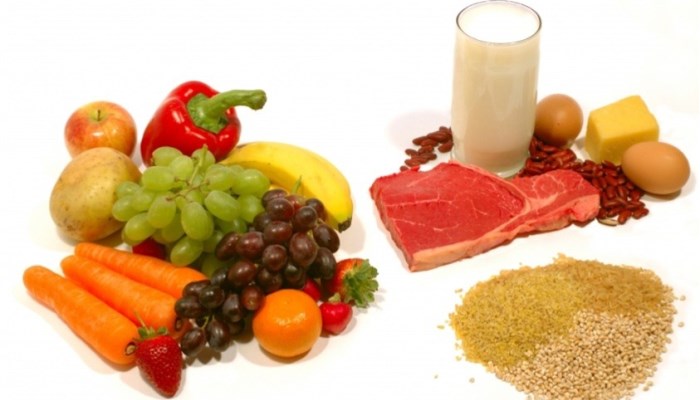 Nutrition (also called nourishment or aliment) is the provision, to cells and organisms, of the materials necessary (in the form of food) to support life. Many common health problems can be prevented or alleviated with a healthy diet.

Nutrition is the study of nutrients in food, how the body uses nutrients, and the relationship between diet, health and disease. Major food manufacturers employ nutritionists and food scientists. Nutritionists may also work in journalism, education and research. Many nutritionists work in the field of food science and technology.

Nutrition- The Science of food and how the body uses it in health and disease.
The diet of an organism is what it eats, which is largely determined by the perceived palatability of foods. Dietitians are health professionals who specialize in human nutrition, meal planning, economics, and preparation. They are trained to provide safe, evidence-based dietary advice and management to individuals (in health and disease), as well as to institutions.

A poor diet can have an injurious impact on health, causing deficiency diseases such as scurvy, beriberi, and kwashiorkor; health-threatening conditions like obesity and metabolic syndrome; and such common chronic systemic diseases as cardiovascular disease, diabetes, and osteoporosis.

Nutritional science investigates the metabolic and physiological responses of the body to diet. With advances in the fields of molecular biology, biochemistry, and genetics, the study of nutrition is increasingly concerned with metabolism and metabolic pathways: the sequences of biochemical steps through which substances in living things change from one form to another.

Carnivore and herbivore diets are contrasting, with basic nitrogen and carbon proportions being at varying levels in particular foods. Carnivores consume more nitrogen than carbon while herbivores consume less nitrogen than carbon, when an equal quantity is measured. Nitrogen is the predominant source of energy for organisms, through the nitrogen cycle, with various minerals and vitamins being equally vital. Nitrogen is also the primary energy for regular metabolic rates, this necessitates greater sums of plants for herbivore digestion, to absorb significant energy for sustenance and stamina.

The human body contains chemical compounds, such as water, carbohydrates (sugar, starch, and fiber), amino acids (in proteins), fatty acids (in lipids), and nucleic acids (DNA and RNA). These compounds in turn consist of elements such as carbon, hydrogen, oxygen, nitrogen, phosphorus, calcium, iron, zinc, magnesium, manganese, and so on. All of these chemical compounds and elements occur in various forms and combinations (e.g. hormones, vitamins, phospholipids, hydroxyapatite), both in the human body and in the plant and animal organisms that humans eat.

The human body consists of elements and compounds ingested, digested, absorbed, and circulated through the bloodstream to feed the cells of the body. Except in the unborn fetus, the digestive system is the first system involved. In a typical adult, about seven liters of digestive juices enter the lumen of the digestive tract. These digestive juices break chemical bonds in ingested molecules, and modulate their conformations and energy states. Though some molecules are absorbed into the bloodstream unchanged, digestive processes release them from the matrix of foods. Unabsorbed matter, along with some waste products of metabolism, is eliminated from the body in the feces.

Essential nutrients- Substances the body must get from foods because it cannot manufacture them at all or fast enough to meet its needs. These nutrients include proteins, fat, carbohydrates, vitamins, minerals, and water.

Digestion- the process of breaking down food in the gastrointestinal tract into compounds the body can absorb.
Kilocarlorie- a measure of energy content in food; 1 kilocalorie represents the amount of heat needed to raise the temperature of 1 liter of water 1 c; commonly referred to as calorie (1 kilcarlorie contains 100 calories)

Protein – an essential nutrient; a compound made of Amino acids that contains carbon, hydrogen, oxygen, and nitrogen. Protein form important parts of the body’s main structural component muscles & bones. Proteins also form important parts of blood. Enzymes, some hormes, and cell membranes: complete and incomplete proteins- individual protein source are considered complete if they supply all the essential amino acids in adequate amounts and incomplete if they don’t. Meat fish poultry eggs milk cheese and other food from animal sources provide complete proteins. Incomplete proteins which come from plant sources such are legumes and nuts, are good sources of most essential amino acids, but are usually low in one or two.

The body can produce amino acids- the building blocks of protein amino acids
Legumes- vegetables such as peas and beans that are high in fiber and are also important sources of protein
Saturated fat- fat with no carbon- carbon double bonds solid at room temperature.
Monounsaturate fat- fat containing two or more carbon- carbon double bonds liquid at room temperature.
Hydrogenation- process by which hydrogen’s are added to unsaturated fats, increasing the degree of saturation and turning liquid oils into solid fats. Hydrogenation produces a mixture of saturated fatty acids and standard and transforms of unsaturated fatty acids.

Trans fatty acid- a type of unsaturated fatty acid produced during the process of hydrogenation; trans fats have an typical shape that effects their chemical activity.
Cholesterol- waxy substance found in the blood and cells and implicated in heart disease.
Low-density lipoprotein (LDL) –blood fat that transports cholesterol to organs and tissues; excess amounts result in the accumulation of deposits on artery walls.
High-density lipoprotein (HDL)- bloods fat that helps transport cholesterol out of the arteries thereby is protecting against heart disease.
Omega- 3 fatty acids- polyunsaturated fatty acids commonly found in fish oils that are beneficial to cardiovascular health; the end most double bond occurs three carbons from the end of the fatty acid chain.
Carbohydrate- essential nutrient; sugars starches and dietary fiber are all carbohydrates.
Whole grain- the entire edible portion of a grain such as wheat, rice, or oats, including the germ,endosperm.

A healthy balance of carbohydrate, protein, and fat per day is:

Everyone in medicine is involved in nutrition
If you ask any health care professional, be it a doctor, nurse, psychologist, or dentist to identify a part of medicine that is not at all related to nutrition, there will be a long silence as they scratch their heads.

Nutrition is present in all processes of life. Right from the very moment the sperm fertilizes an egg, through fetal development in the uterus, to the birth, human growth, maturity, old age, and eventual death. Even after death the human body serves as nutrition for other organisms. Anything that involves life and chemical or biochemical movement has nutrition at its core.

Anything that lives is dependent on energy, which results from the combustion of food.