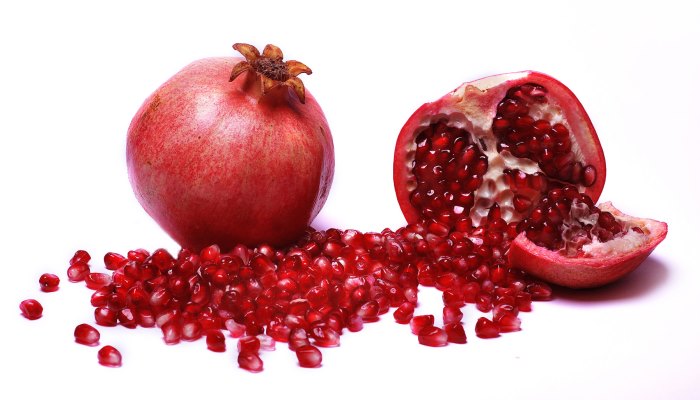 A pomegranate (Punica granatum) is a fruit-bearing deciduous shrub or small tree growing between five and eight meters tall.

Thepomegranate is mostly native to the Iranian Plateau and the Himalayas in North Pakistan and Northern India. It has been cultivated in the Caucasus since ancient times, and today, is widely cultivated throughout Iran, Azerbaijan, Afghanistan, India, Pakistan, Bangladesh, Iraq, Egypt, China, Burma, Saudi Arabia, Israel, the drier parts of southeast Asia, the Mediterranean region of Southern Europe, and tropical Africa. Introduced into Latin America and California by Spanish settlers in 1769, pomegranate is now cultivated in parts of California and Arizona for juice production.

An ancient fruit, pomegranate is mentioned in Europe as early as the Iron-Age Greek Mythology in the Homeric hymns. Yet, it has still to reach mainstream prominence as a consumer fruit in commercial markets of North America and the Western Hemisphere.

Potential health benefits
In preliminary laboratory research and human pilot studies, juice of the pomegranate was effective in reducing heart disease risk factors, including LDL oxidation, macrophage oxidative status, and foam cell formation, all of which are steps in atherosclerosis and cardiovascular disease.

While one study showed that, in a test tube, extracts of the fruit can inhibit the proliferation of human breast cancer cells, no studies have shown that eating pomegranates has any effect on the development of breast cancer in humans.

Pomegranate Nutrition
Pomegranates contain many vitamins and nutrients necessary for the body to function properly and stay healthy in the long run. One medium-sized fruit contains:

Pomegranate aril juice provides about 16% of an adult's daily vitamin C requirement per 100 ml serving, and is a good source of vitamin B5 (pantothenic acid), potassium and polyphenols, such as tannins and flavonoids.

Pomegranates are listed as high-fiber in some charts of nutritional value. That fiber, however, is entirely contained in the edible seeds which also supply unsaturated oils. People who choose to discard the seeds forfeit nutritional benefits conveyed by the seed fiber, oils and micronutrients.

The most abundant polyphenols in pomegranate juice are the hydrolyzable tannins called ellagitannins formed when ellagic acid binds with a carbohydrate. Punicalagins are tannins with free-radical scavenging properties in laboratory experiments and with potential human effects. Punicalagins are absorbed into the human body and may have dietary value as antioxidants, but conclusive proof of efficacy in humans has not yet been shown. During intestinal metabolism by bacteria, ellagitannins and punicalagins are converted to urolithins which have unknown biological activity in vivo.
Other phytochemicals include polyphenolic catechins, gallocatechins, and anthocyanins, such as prodelphinidins, delphinidin, cyanidin, and pelargonidin. The ORAC (antioxidant capacity) of pomegranate juice was measured at 2,860 units per 100 grams.

Many food and dietary supplement makers use pomegranate phenolic extracts as ingredients in their products instead of the juice. One of these extracts is ellagic acid, which may become bioavailable only after parent molecule punicalagins are metabolized. However, ingested ellagic acid from pomegranate juice does not accumulate in the blood in significant quantities and is rapidly excreted. Accordingly, ellagic acid from pomegranate juice does not appear to be biologically important in vivo.

Fights Breast Cancer
Studies in Israel show that pomegranate juice destroys breast cancer cells while leaving healthy cells alone. It may also prevent breast cancer cells from forming.
Lung Cancer Prevention
Studies in mice show that pomegranate juice may inhibit the development of lung cancer.
Slows Prostate Cancer
It slowed the growth of prostate cancer in mice.
Keeps PSA Levels Stable
In a study of 50 men who had undergone treatment for prostate cancer, 8 ounces of pomegranate juice per day kept PSA levels stable, reducing the need for further treatment such as chemotherapy or hormone therapy.
Protects the Neonatal Brain
Studies show that maternal consumption of pomegranate juice may protect the neonatal brain from damage after injury.
Prevention of Osteoarthritis
Several studies indicate that pomegranate juice may prevent cartilage deterioration.
Protects the Arteries
It prevents plaque from building up in the arteries and may reverse previous plaque buildup.
Alzheimer's Disease Prevention
It may prevent and slow Alzheimer's disease. In one study, mice bred to develop Alzheimer's disease were given pomegranate juice. They accumulated significantly less amyloid plaque than control mice and they performed mental tasks better.
Lowers Cholesterol
It lowers LDL (bad cholesterol) and raises HDL (good cholesterol).
Lowers Blood Pressure
One study showed that drinking 1.7 ounces of pomegranate juice per day lowered systolic blood pressure by as much as 5 percent.
Dental Protection
Research suggests that drinking pomegranate juice may be a natural way to prevent dental plaque.

Pomegranate juice can slow the progression of prostate cancer. In a study of 50 men who had undergone treatment for prostate cancer, 8ounces of pomegranate juice per day kept PSA levels stable, reducing the need for further treatment such as chemotherapy or hormone therapy. The PSA test is a simple blood test to measure how much PSA (prostate specific antigen) a man has in his bloodstream at a given time. The PSA test is the most effective test currently available for the early detection of prostate cancer.

Preparation:
Simply cut the leathery outer skin, and peel it back to reveal hundreds of brightly colored red seeds, called arils, which are embedded in a 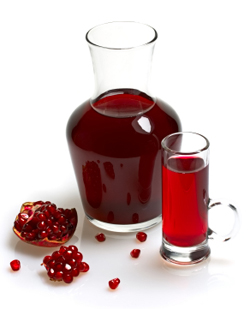 creamy white membrane. Pluck out the arils and store in a container in your refrigerator for use in almost anything that you want to dress up with color and a powerful health punch.

Those wishing to gain the health benefits of pomegranate without the added sugar in juice or the hard work may consider purchasing pomegranate supplements. These come in capsule form containing pomegranate extract. These supplements have the added benefit of reducing dental plaque because of the anti-bacterial quality of the extract.